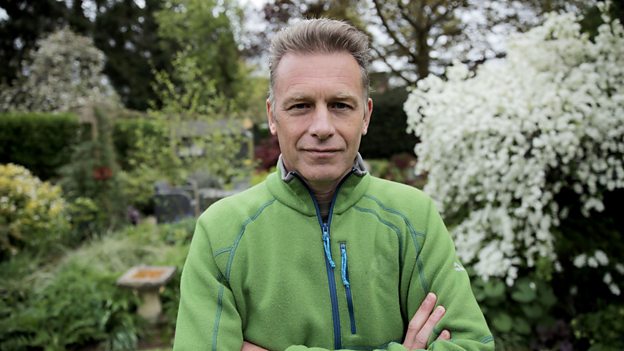 Get ready for a new BBC documentary, The British Garden: Life & Death on Your Lawn. This will air on BBC Four on Tuesday 11th July at 9pm.

In this 90 minute BBC Four film, Chris Packham and a team of wildlife experts spend an entire year as garden explorers. Exploring every inch of eight gardens in a suburban street, to answer a fundamental question: how good for wildlife is the great British garden?

Beneath the peonies and petunias they reveal a beautiful and brutal hidden world, a Serengeti in miniature, that’s far wilder than you might think.

Through all four seasons, Chris delves deep into the strange secret lives of the gardens’ smallest residents. He finds male crickets that bribe females with food during sex, spiders that change colour to help catch prey, and ferocious life-and-death battles going on under our noses in the compost heap.

But he also shows a different side to some of our familiar garden residents, showing that a robin’s red breast is actually war paint, and a single litter of foxes can have up to five different fathers. And, come Spring, Chris witnesses the astonishing sight of a boiling ball of frisky frogs in a once-in-a-year mating frenzy.

By the end of the year, with the help of a crack team from London’s Natural History Museum, as well as top naturalists and wildlife experts, Chris reveals how many different species live in the back yards of a single street, and just how good for wildlife our gardens really are.

You’ll never look at your garden in quite the same way again.

We’re going to be tuning in and hope you will too.

Description and images courtesy of the BBC 2017 ref:  http://www.bbc.co.uk/mediacentre/proginfo/2017/28/the-british-garden